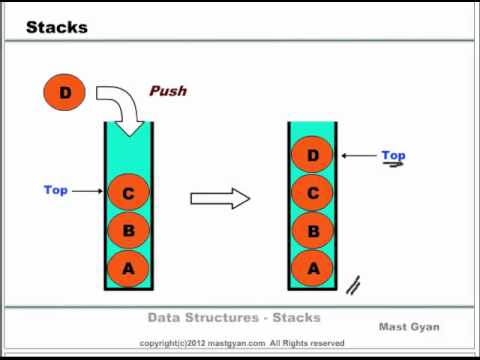 Stacks are dynamic data structures that follow the Last Out (LIFO) principle. The last item to be inserted a stack is the first one to be deleted from it.

For example, you have a stack of trays on a table. The tray at the top of the stack is the first item to be moved if you require a tray from that stack.

have restrictions on the insertion and deletion of elements. Elements can be inserted or deleted only from one end of the stack i.e. the top. The element at the top is called the top element. The operations of inserting and deleting elements are called push) and pop) respectively.

For example, in the stack of trays, if you take the tray on the top and do not replace it, then the second tray automatically becomes the top element (tray) of that stack.

Queues are data structures that follow the First In First Out (FIFO) i.e. first element that is added to the queue is the first one to be removed.

Elements are always added to the back and removed from the front. Think of it as a line of people waiting for a bus. The person who is at the beginning of the line is the first one to enter the bus.

function adds an element to the back of the queue.

function removes the element from the front of the queue.

is a special case of balanced binary tree data structure where the root-node key is compared with its children and arranged accordingly. If α has child node β then −

As the value of parent is greater than that of , this property generates Max Heap. Based on this criteria, a heap can be of two types −

Min-Heap − Where the value of the root node is less than or equal to either of its children.

Max-Heap − Where the value of the root node is greater than or equal to either of its children.

Both trees are constructed using the same input and order of arrival.

Hash Table is a data structure which stores data in an associative manner. In a hash table, data is stored in an array format, where each data value has its own unique index value. Access of data becomes very fast if we know the index of the desired data.

Thus, it becomes a data structure in which insertion and search operations are very fast irrespective of the size of the data. Hash Table uses an array as a storage medium and uses to generate an index where an element is to be inserted or is to be located from.